Hello girls and wanna be girls. Three months without a single post doesn’t make much of a blog but let’s not get grumpy about it. After all, I just decided to give another shot to this old forgotten project of mine. “OK …, so how’s your solo pvp adventure going ?” Well, if you have played Eve for more than a month and you have read this then you already know the answer: it’s on hold. I finally decided to do it the proper way, with a decently skilled character which is now training, training, … and training. As you can imagine, the rest of this post is devoted to a short review of my attempt to solo pvp with a low skill points character. It covers my Eve activity for the months of October and November.

[As a side note, have you noticed that 99% of the Eve girls, including myself, are boys? ]

Imagine you’re a new Eve player. You have two accounts with three characters: a two months old trader, a one month old combat pilot training towards battleships for L4 missions and a no skill points scout. You are sitting on a few billions made from trading and you’re looking for some fun things to do in Eve. Solo pvp sounds perfect, right? That’s exactly what I thought three months ago. However, you can’t just jump in or can you?

In order to improve my chances of success,  like all the self-respecting Eve citizens, I felt compelled to get educated on the subject. Now, a patient person would have started to make love with Google but that person wasn’t to be me. In the end, all I wanted was a piece of paper attesting what a great pvp’er I am: i.e. if only I could manage to get my hands on one of those then I ‘d have it hanged on a wall, look at it and start feeling good about myself[*].  Due to laziness and such, following a proper university was not among the top options so I took the shortcut of graduating the Agony PvP Basic class. Great, I was finally ready to start killing things[*].

Chapter one – Please let me kill you

When the long neglected urge to start a pvp havoc has reached its peak I found myself around Rens. A brief peep into the surrounding area and the hunting grounds were chosen: the low sec area of Anamake. The perfect starting place for a newbie: i.e. a lot of kills on the Eve map.  I quickly grabbed a Rifter and I jumped into action. After ten minutes or so I was back in Rens. This failure wasn’t going to stop my dream, so I re-shipped in a Slasher and … well, I  admit it – I just had to re-ship a lot: are you happy now?

[I have some difficulties in choosing which one of the following great ideas was actually the worst: starting to pvp with no knowledge of the base pvp game mechanics or choosing the area around Anamake, home of one of the best pvp alliances in Eve, as the “hunting grounds”. Which one do you vote? ]

After all these failures, I tried my luck flying a Firetail, then a Trasher.  Except getting blown up in 30 seconds instead  of 10, things didn’t change much. By now, I died more times than I care to remember. As a result, I have entered the “please let me kill you” mode.  Anyway, flash-forward two days and my stubbornness finally paid up: my first solo kill, my first solo low sec kill. Actually, this was nothing else than another proof that statistics  rules the universe but let’s not go into details here. Two lousy kills in a few days doesn’t make the glorious pvp career I imagined to have. Moreover, while I was dreaming of myself jumping on the grid in a battleship and blowing up all the things that dare to move, I had to take a sip from the welcome to Eve glass.

Chapter two – You can’t touch me

I had to put my wounded pride aside and accept that if you want to solo pvp there is simply no way around learning all the pvp game mechanics. There is no shortcut to be taken, there is no fleet to hide your lack of knowledge. You have to learn about how damage is applied,  how the ships are repaired, which ships are good at …,  etc. And this is what I did. I was playing Eve in a “now and then” mode but still some signs of improvement didn’t take long to show up. While it’s true that I was still dying a lot I was also beginning to get more kills: Imperial Navy Slicer,  Condor,  Algos,  Coercer,  Tristan,  Slasher.  The most important thing, I started to feel a lot more comfortable roaming through low sec and being chased by almost every ship I met.

In other words,  I had to make peace with this: the knowledge of the game, the knowledge of the people who are playing the game, … form the “you can’t touch me” cloak. I had to invest the effort necessary to acquire one such cloak for myself. Part of it was to start a pvp frigate specialized character which is now in training. I did this at the end of the first week of November.

For some unknown reason to mankind I couldn’t stay far away from putting to a test the things I was learning about pvp game mechanics. Since I still had no character capable of flying frigates efficiently I used Ritual Union again, but this time I changed the area of operations. The new hunting grounds: Hevrice. After the not so successful first days, I managed to convince the impatient side of myself to let me pick up the fights more wisely: after all I was still on a poor developed character, I had better skills to fly a battleship but I was flying a frigate: the Firetail. Bellow you can see the result of having some patience: 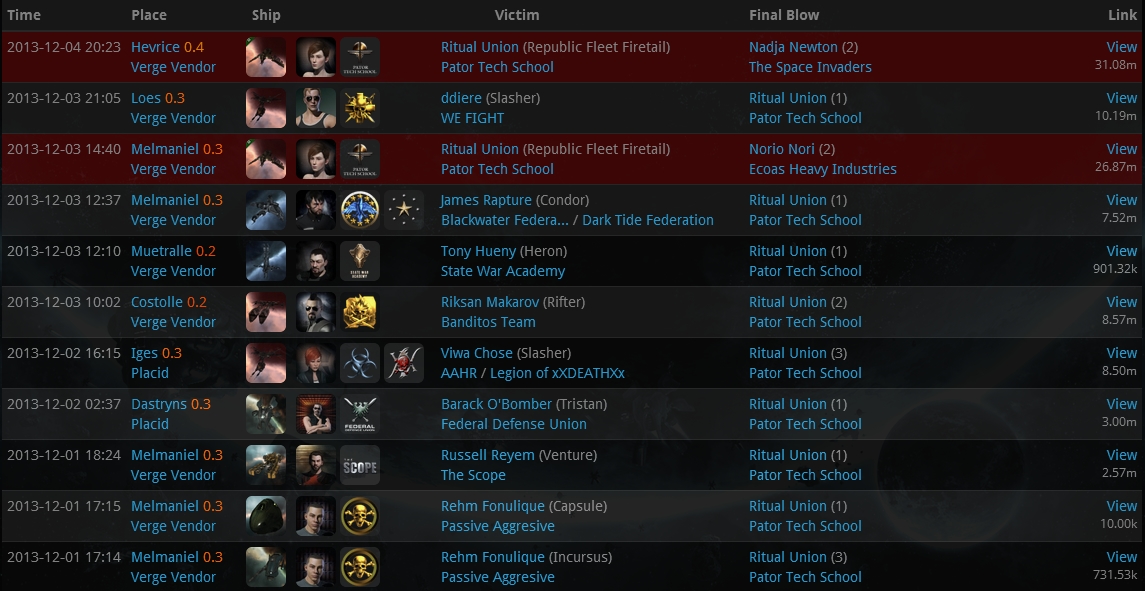 With two exceptions, where I walked into an ambush and I made a fool of myself, I managed to kill almost everything I engaged. I particularly enjoyed these two fights: Slasher, Condor.  Both were against much older characters than mine and both characters had an active positive kill-board. The fact that they were  eager to fight me and that I had to do more than press “activate your modules” to win these fights added a joy layer to the sweet taste of victory.  This made me think that it may still be hope for my pvp dream but it also proved another thing: to enjoy solo pvp you need a versatile character. For example, do you want to do solo frigates pvp and be in a “who’s your daddy now” mode? My strong belief is that you need to be able to fly well at least all T1 frigates. Otherwise your target selection is so limited that the fun you get from doing it when divided by the time required to do it is so low that it makes mining look like a very exciting activity.

Epilogue – Back to square one

To become successful at solo pvp you obviously need more than a versatile character. However, this is the vital ingredient since it doesn’t matter how good your intel is, how wonderfully you pilot your ship, how good you’re at managing the “panic mode”, etc. If you don’t have a versatile character, i.e. you’re limited to fly one particular ship, you’ll soon discover that is not wise to engage most of the ships you meet because of the rock-paper-scissors game that is Eve 1v1 pvp.

Well, the “good news” is that since I have now a two months old frigate character I only have to wait 3 to 4 months. At this point, assuming that you’re an Eve player, most of you reading this are probably dying to tell me: “Dude, did you not get the memo? Eve is a mmo. Join a corporation. Be the hero tackler and so on …“. The answer to this and the new plan, both for Eve and for this blog, in the tomorrow post.